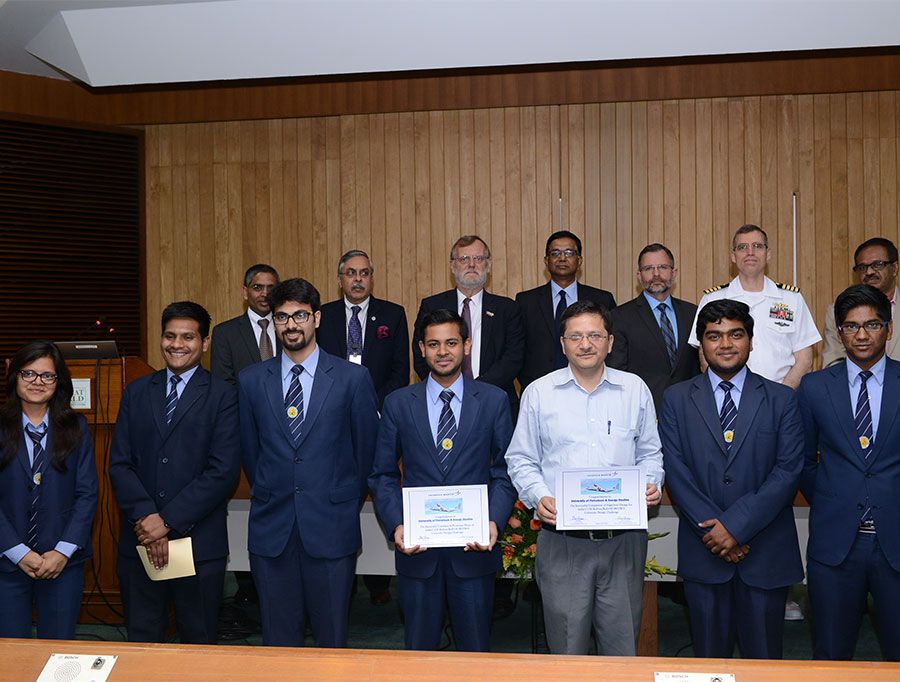 UPES team Tesseract emerges winner of the Lockheed Martin Roll-On-Roll-Off competition launched in 2014. At a glittering award ceremony of C130J Super Hercules Aircraft Roll on/ Roll Off Universtiy Design Challenge, held on 8th March 2016 at India Habitat Center in New Delhi, the UPES team was awarded a grant of $40,000 to develop prototype of the module. Now, Lockheed Martin will work with UPES team to explore options with government and industry to explore mature prototype for the global markets. This team will develop prototypes of their modules and a go-to-market strategy with Tata Advance System Limited– Hyderabad.

The five teams from the prestigious Universities across India who were shortlisted for phase two were tasked to present their High Level Design (i.e. Roll On / Roll Off System) for the C-130 J Super Hercules Payload. Followed with this were the presentations, to evaluate them on the Technical Readiness Level (TRL) along with the market feasibility. “The teams were evaluated based on their Technical / Conceptual Design, Value to the Mission and Cost / Benefit, and now our team has successfully prototype phase of this challenge,” said Dr. Sudhir Joshi, faculty UPES and Principal-Investigator- Roll-on/Roll-off (RO/RO). The other team who wins this award as co-winner was IIT Madras. Among notable teams who could not make for this phototype phase was IIT Delhi and BITS Goa.

Launched in November 2014, the Lockheed Martin C-130J Roll-On/Roll-Off University Design Challenge provided research grants for each university team to work with local industry partners and mentors from Defence Research and Development Organisation (DRDO). The objective of the challenge was to develop design specifications for proposed modules that could be used on a Lockheed MartinC-130J Super Hercules cargo aircraft. It is believed that the proposed capabilities presented by winning teams (including UPES team) in this competition are expected to increase efficiency and effectiveness of future disaster relief operations supported by C-130J aircraft.

Since 2007, Lockheed Martin has been successfully running the India Innovation Growth Program in partnership with the Department of Science and Technology, Indo-US Science and Technology Forum, Federation of Indian Chambers of Commerce and Industry, Stanford Graduate School of Business and the IC2 Institute at the University of Texas.