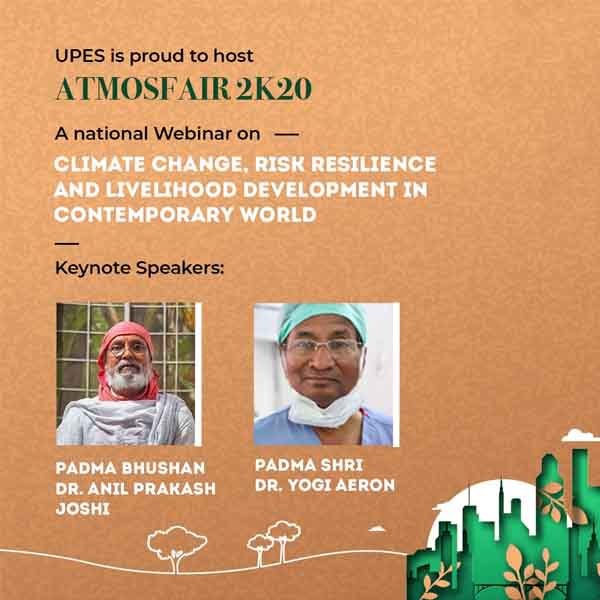 UPES has always strived for making the world a better place to live in and the institution has always felicitated the endeavour of man to use the natural resources which are at his disposal, proportionately and hence allow the future generations to enjoy the fruits of nature too. Man’s supremacy over the nature has caused destruction of resources that are to be sustained for future generations. UPES has understood the gravity of the issue and in order to spread awareness among the new generation GreenUP Club of UPES had shouldered upon the responsibility to organize ATMOSFAIR-VII (World Ozone Day) a student driven environment awareness program.

Green Up is an active club at UPES with a goal of building a greener and sustainably developed environment and we are proud to say that on the occasion of  World Ozone Day, even in the current challenging situation we have conducted successful virtual events in a way that helped in creating awareness among the students of UPES and several other universities across the nation.

As part of this program, this year, the club successfully conducted events including National Webinar & Panel discussion on Climate change, Risk Resilience and Livelihood Development in contemporary world on 14th and 15th September 2020 respectively.

The Webinar witnessed its inaugural speech by the Chief Guest Padma Bhushan, Dr Anil Prakash Joshi (Founder & Head, Himalayan Environmental Studies and Conservation Organization , HESCO, Dehradun, Uttarakhand ) who spoke on the topic “Development Vs Prosperity” and dragged our attention to the point that people, now a days are running towards saving and uplifting the GDP, keeping the conservation and protection of natural resources aside even when our natural resources contribute to 50% of the GDP. Apart from this, he focused on the principle of nature that states “ Consumers must be Contributors”. In his speech, he also iterated on the point that People can’t win from nature and this pandemic is the best example to prove what amount of damage nature is capable of doing if we don’t redefine our approach towards it and come out of our “Human centric Development” mindsets.

Then, the next speaker of the evening, Dr. R.B.S. Rawat ( Chairman, Biodiversity PBR Monitoring V Committee-North, Government of India ) took over the stage and spoke about the hard facts about the impact of climate change by providing some astonishing figures like he made the audience aware of the fact the last decade (2011-2020) was recorded as the hottest decade that mankind has ever witnessed, 2019 being the second hottest year on record.  He also raised some important issues like loss of more than 1 million species as an impact of climate change. He also discussed National Action plan on climate change (NAPCC) including JLN National solar mission, National water mission and several others. He also made sure that the Indian INDC targets are well reached to all the young UG & PG students along with PhD scholars. His key message to the listeners was “The more we disrupt our climate, the more we risk severe, pervasive and irreversible impact.

Dr. Sunil Nautiyal (Centre for Ecological Economics and Natural Resources, Institute for Social and Economic Change, Bangalore) then delivered his speech and raised issues about climate change and the driving force behind it. He discussed on various topics such as Impact of climate change on ice mass, rising Global Temperature, Agent flow chart, limitation of resources with increasing population, biodiversity hotspots and their culture. On sharing about his practical experience, he shared that the change that the world is seeing across the globe is driven mainly by economic factors rather than climatic factors. Dr Nautiyal gave a great suggestion of the ‘Concept of smart village’ in which he discussed about creating self sustained villages.

Dr. Deeksha Katyal (Faculty, University School of Environment Management, Guru Gobind Singh Indraprastha University Delhi) with her fantastic and straight forward speech enlightened the gathering on Water Quality management and the consequences of climate change along with the solutions. She also shared her practical experience and research conducted in and around Delhi in the field of water quality index, parameters involved, it’s dimensions and index mapping procedure. Using her mathematical approach and statistical data, she explained how parameters of water quality are measured. She also laid emphasis on vulnerability mapping using DRASTIC model. Dr. Deeksha gave an important mantra to the students and the PhD scholars that “You must not only have faith in yourself but also have faith in the work you are doing”

The last but one of the most informative session was delivered by Mr. Deepak Singh Bisht (Scientist ‘B’, Western Himalayan Regional Centre, National institute of Hydrology, Ministry of Jal Shakti Flood control complex, Jammu Cantt., Jammu) who started with the reference of PM shri Narendra Modi Ji’s statement at UN Climate summit in New York that states “Time to talk is over, time to act now." During his speech, Mr. Bisht talked on several issues related to climate change including extreme temperatures range, intensity and frequency variations, Rapid growth in the concentration of human made sulfate aerosols since the start of industrial revolution, Green house gas emissions and many more. He also made the audience understand the components of climate system, their processes and interactions. Apart from it, he also dragged the attention towards the upcoming likely experiences of more Drought and other natural calamities like conditions that India would be facing if we continue damaging the nature with the same pace. He concluded his speech stating that Collectively we can tackle the issue as somebody has rightly said “UNITED WE STAND” & “we should aim for the best through mitigation while preparing ourselves for the worst through adaption”

2nd day of the program witnessed a panel discussion on Climate change, Risk Resilience and Livelihood Development in contemporary world and our prominent guests for the event shared their views on the subject.

Padma Shri Dr. Yogi Aeron delivered a great speech and raised issues about climate change, it’s origin and the possible solutions to it. He laid light on various common topics such as Climatic war of India-China, human adaptability these days and many other issues. Dr. Yogi shared his practical experience and told that ‘Climate is the deciding factor of our life’. He told that continuous increase in Earth’s temperature will lead to a increase in number of diseases such as dengue, malaria and increase in infant mortality. He explained how our origin depends on this climate.

Dr. Laxmi Prasad Pant (State Editor, Dainik Bhaskar, Rajasthan) with his fantastic and straight forward speech enlightened the gathering on effects of climate change and risk resilience. He shared his experience on his visit to Kedarnath during floods in 2013. He laid emphasis on how these issues are now politically governed. Dr. Pant told that the formation of Himalayan Development Authority is till pending. He also told that the seriousness of today’s COVID situation should be the same as that of road accidents and climatic change.

Then Dr. Rohit Joshi (Senior scientist, plant tissue cultural lab, IHBT Palampur, Himachal Pradesh) enlightened the audience on climate change referring to IPCC, 2007. He discussed about its impact on agriculture, hydropower, forest management and biodiversity. Along with it, he also dragged our attention towards how in the long run this climate change can affect agriculture in terms of productivity, growth rate, transpiration rate, moisture availability etc.  He also showed his concern towards some major issues like rise in global temperature, melting of polar ice leading to animals drowning, migrating birds forced to change their time and place of migration, melting of glaciers, drought, heat waves and many more. His words on food demands likely to rise by 60-70% till 2050 left everyone with worrying faces. Apart from it, he also discussed Genetics & Breeding and Biotechnology. He concluded with his words stating “ Climate change is a reality and we need to accept it. Adaption strategies can help to minimize negative impacts to some extent where as mitigating options can help in long run but these need research, funding & Policy support”

Continuing the panel discussion, Dr Anant Pande (Department of Endangered species management, Wildlife Institute of India) shared his views on climate change and started by sharing an interesting cartoon with a message that till the time we discuss and show concerns over the effects of climate change, it would be too late to work upon. He iterated on the point that it is high time, we should start doing our part to save our nature rather than just keep worrying about it. He also shared some surprising figures that this planet is likely to warm > 1.5 degree C between 2030 and 2050. He also showed concerns over 47% local species extinctions and around 50% reduction in species ranges. In the event he also discussed upon “Threats to Marine life from Climate Change” like Acidic oceans, stormy weather, rising sea level, coral bleaching and several others. Dr. Pande also made the audience aware about the technological advancements in marine conservation and had a good discussion with the panelists over the same. He concluded by urging the audience to start doing their part to save the mother earth before it’s too late.

Then Mr. Amit Bhanot (Managing Partner of Himalayas You and Me Foundation (HUM) & Senior Journalist) concluded the discussion with a message that until and unless we come in front and actively work to save our planet all these discussions will go in vain. He focused on the point that there is a lot of scope in the field of climate change and your efforts can not only make you rich & famous but also can save the mankind which is rapidly leading to a disastrous end. He encouraged the young minds present in the discussion to come up with innovative ideas for startups in and urged them to work towards saving the mankind from the effects of climate change.

Apart from this the club also organised several on campus online events like Photography, Singing, Dancing, Caption writing, Quiz, Videography and E-poster making to raise awareness on the occasion of World Ozone Day.

Valedictory function as a closure to this beautiful venture was scheduled on 16th September 2020. The  ceremony’s stage was overwhelmed with the presence of Ex -Presidents of the Green up Club of UPES including pioneer of the club, Mr. Sushruta Shwetabh, (Underwriting Manager - Property & Energy, Tata AIG , President -2014 ) ; Mohammed Suhail Ansari  (Founder in residence ,EFSG8 at Entrepreneur First , President – 2015) ; Mr. Sai Kiran (Senior Engineer, HSE Department, Vedanta Resources Limited, President – 2018) & Mr. V Teja (Associate Safety Officer, Mcdermott President – 2019). They shared their experiences, challenges & learnings with the current students and active members of Green up Club of UPES. They guided and encouraged all the participants and organizers of the event with their valuable inputs and promised to be there for the help and guidance whenever required. Certificates and prizes were presented to the winners  The session was moderated by Mr. Deepraj Sinha who was appointed as the next president of Green Up club in the ceremony.