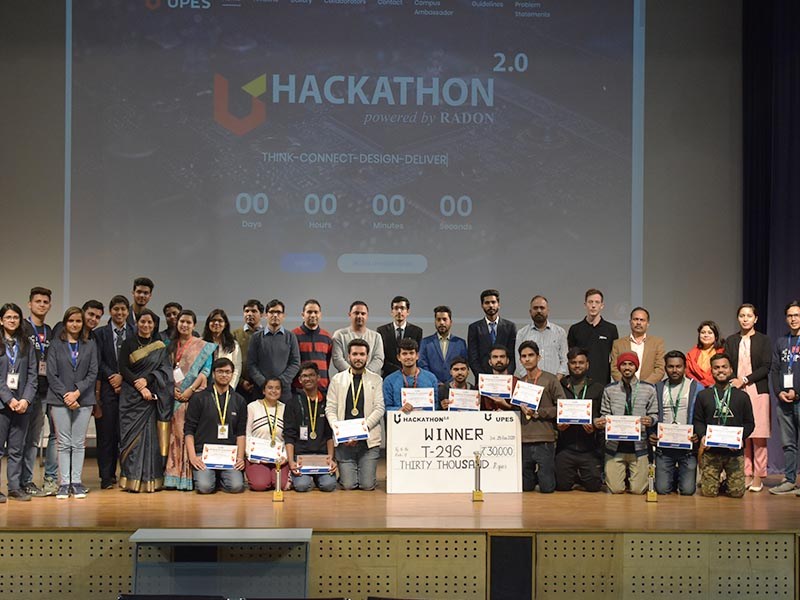 The most-awaited coding event of UPES, ‘UHackathon 2.0’ took place on February 28 and 29, 2020, in Bidholi Campus, Dehradun. According to the event convener, Chandra Mani Sharma, and co-conveners Sugandha Sharma and Dr Shweta Mongia from UPES School of Computer Science, the event registered participation of more than 50 teams from 11 states of the country. Winners received prizes worth INR 1 lakh. Three outstanding teams from the hackathon were chosen for direct participation in IEEE International Hackathon YESIST, to be held in Malaysia in 2020. Some of the participants also got the opportunity for internships from CppSecrets.com and Amptech Software.

The inaugural ceremony started with lamp-lighting by the guests and the dignitaries, followed by Saraswati Vandana. The Chair of the event Prof. (Dr.) T.P. Singh gave the welcome address. Dr. Veena Dutta enlightened the participants and the guests about the achievements of UPES. Chief Guest, Prof. (Dr.) MSM Rawat, motivated the participants to excel in their field. Eminent Guest, Mr. Avelo Roy, an eminent start-up mentor, addressed the students to inculcate humanitarian values and excel as Technopreneurs.

The Hackathon was declared open at 12 noon. The first evaluation of teams was done at 3 pm on the same day, second evaluation took place at 11 pm and the third evaluation started from 10 am on the second day. Out of 53 teams, only the best ones could make it to top 12 teams.

Team ‘The Hack Squad’ T296 from SIB Institute, Karnataka, won the 1st position by creating a 3D model to create an extended version of virtual reality and give realistic feedback to the user, winning money prize of Rs.30,000, trophy and medals, among other goodies.

The second position was bagged by team T380 from UPES, Dehradun, for the Smart Helmet idea, winning a cash prize of Rs.20,000.

The third position went to team T395 from Silicon Institute of Odisha, winning a cash reward worth Rs.10,000.

Several other teams won prizes by Xebia under various categories, criteria, such as the most innovative idea, most agile team, most hardworking team and most promising team.

Out of the top 12 teams, three teams won direct entry into IEEE YESIST Hackathon Final Round to be held in Malaysia. The three teams included one from UPES which implemented the idea of Smart Helmet, an IoT-based helmet that would help in prevention of road accidents, the second team from Silicon Institute of Odisha presented a driver alert system using sensors and image processing, while the team from Chitkara University presented an iOS/Android app to deal with disaster management.

Besides the above prizes, Best Institute, Dehradun Campus Ambassador Award went to Manjot Singh from Alpine.

The judges shared some tips and tricks with the students to be used in challenges like Hackathon. Mr. Himanshu from Radon congratulated the winners.